Zondervan’s NIV Kids’ Visual Study Bible contains hundreds of labeled images, scores of infographics, and countless easy-to-understand study notes in page margins. Provided images, both photographic and illustrated, are from an array of sources, each noted in fine print below the image. The infographics are beautifully simple and informative (parents will likely want to reference these for their own use)! The study notes are likely to be helpful for young readers, and when addressing controversial issues (e.g., the meaning of “day” in Genesis 1) the contributors include several brief interpretations, which is good for young readers and will lead to good questions and discussions with more mature Christians.

This hardcover copy is a brick, and I doubt any kid will be carrying it around. It may be more helpful as a stay-at-home Bible. I imagine the imitation leather editions may be a bit more portable, but not by much. While the layout is quite reasonable and easy on the eyes, there’s still a lot of wasted space in the set margins wherein study notes are place, which contributes to an increase in physical size.

All in all (NIV translation aside), I think kids will find this niche Bible interesting and helpful, but won’t want to carry it around.

*Disclosure of Material Connection: I received this book free from the publisher through the BookLook Bloggers book review bloggers program. I was not required to write a positive review. The opinions I have expressed are my own. I am disclosing this in accordance with the Federal Trade Commission’s 16 CFR, Part 255: “Guides Concerning the Use of Endorsements and Testimonials in Advertising.” 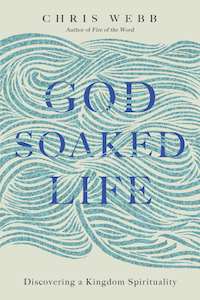 Chris Webb’s God-Soaked Life: Discovering a Kingdom Spirituality is a beautiful and encouraging reminder to live with eyes to see and ears to hear the reality of the kingdom of God right now. Disciples of Jesus are not called to wait until they “fly away” somewhere; they are called to live in the kingdom now until we are fully united with God in the new heavens and new earth. What does that mean? Living and acting now in such a way that embodies the future kingdom that is “already among [us]” (Luke 17:21) and “not from this world” (John 18:36)—a kingdom and worldview that originated in God, not a human mind or institution. This way of love is not merely a suggestion; it’s a command. But if all we’re being are rule followers, then we’ve missed the entire point of loving God and neighbor—the kingdom.

Webb presents perspective on and life in the kingdom of God in practical and accessible ways. The book is divided into seven sections (The Invitation, Heart Renewal, Fearless Honesty, Close to the Father’s Heart, God in Everyday Life, Creating Community, and The Politics of Love), each containing three substantial chapters followed by a concluding fourth, which includes seven helpful and introspective questions based on particular readings of scripture. These questions may be pondered and answered all at once or, as suggested, taken a day at a time for a week’s worth of introspection and devotional time.

I will be recommending this book to my students, as well as many others (including you!). If it were scheduled to be published a month earlier, I would have had it on a reading list. Alas, it will be released too late, but never too late to recommend!

Grace and Peace to you all, and may you have eyes to see and ears to hear the kingdom of God in which we already live!

*I received a temporary, unpublished digital copy (hence no page numbers for included quotations) for review from InterVarsity Press via NetGalley. 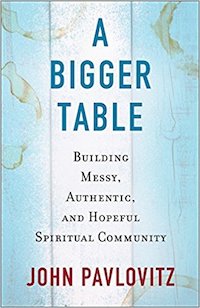 In the introduction to A Bigger Table: Building Messy, Authentic, and Hopeful Spiritual Community, John Pavlovitz writes, “This book is about humanity, about the one flawed family that we belong to and the singular, odd, staggeringly beautiful story we all share. It’s about trying to excavate those priceless truths from beneath the layers of far less important things that we’ve pile on top of them since we’ve been here. It’s about jettisoning everything in and around us that would shrink our tables.” (xiii) What it’s really about is tolerance and inclusion of LGBTQ in Christ’s church with no reservation. While I concur with Pavlovitz that we need to love people and be willing to sit at the same table, his use of Scripture and Jesus’ example leads the reader to believe that exclusivity is the only sin, that we are only unwilling to allow people into the Christ’s church because of our prejudices and biased upbringings, and that Jesus was a happy hippy who had no agenda and didn’t try to change people (except to make them tolerant of all other people). Much of this stems from some personal and unpleasant experiences with the church, with which many of us can certainly relate and understand. He rightly pushes back against business- and attraction-model churches, but argues for something that may appear virtually and functionally the same to those on the outside (108–110). Much of what Pavlovitz believes and writes is based on emotion what has felt good to him (even if they be difficult to deal with) rather than from a good wrestling with the whole of the Bible.

While likely intended to be a book about mercy and grace, it is really about loving people as they are and leaving them that way “because we are full image bearers of God and beloved as we are, without alteration.” (164) After reading Pavlovitz’s own words about his upbringing and current faith, I am not convinced he believes he has ever sinned (164–165) or that there is such a thing as sin (he encourages the reader to see suffering instead of sin [124], but this ought to be both-and, not either-or). Heaven on earth for him is simply diversity for the sake of diversity with open conversations where there is absolutely no pushback or accountability—where churches people can curse and say anything from pulpits like they do at his because that’s “real.” (81–82) While I’m certain there are many who will find this and the embedded universalism appealing, it’s not the image of ultimate redemption I find in Scripture.

*I received a temporary digital copy for review from Westminster John Knox Press via NetGalley. 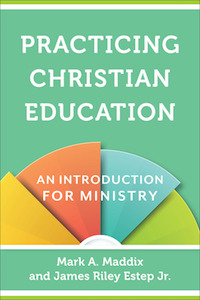 In Practicing Christian Education: An Introduction for Ministry, authors Mark A. Maddix and James Riley Estep, Jr. appear to be primarily concerned with Wesleyan tradition and ecclesiology in combination with a business model ecclesiology. While the stated purpose(s) of the text are unclear and sometimes contradictory, it is apparent that the book is geared toward those who are looking to be paid “Education Ministers/Pastors” in large congregations who fit the stated models with significant budgets. The book is not about Christian education in a broad sense (e.g., teaching various subjects from and with a Christian manner and perspective), and many will likely find it confusing and unhelpful if looking to it for any purpose other than that stated above.

Assessing it for what it is, and not for what I thought it might be, the text falls short of being very helpful. Disjointed, redundant, contradictory, and unclear throughout, I would not recommend it for the seminary students the authors hope will read it. While there are certainly helpful moments, largely by way of quoting others’ material, I do not find them to be justifiable reasons for wading through the whole. If I had not agreed to review the book, I would have stopped reading after chapter six (out of seventeen) because it felt like I was simply being taken for a ride with no purpose or destination in sight—it didn’t get much better.

While I concur with the authors that churches need to take seriously what, how, and when they teach so that all can (and will!) mature in their faith and life in the kingdom of God, I did not find this book as a whole to be a clear and helpful tool for educating those leading, guiding, and/or undertaking that task.

*I received a temporary, pre-published digital copy for review from Baker Academic via NetGalley.

As Kingfishers Catch Fire: A Conversation on the Ways of God Formed by the Word of God is a collection of sermons presented to Christ Our King Presbyterian Church (UPCUSA) in Harford County, Maryland, by Eugene H. Peterson between the years of 1962 and 1991. While these sermons have been organized according to their relation to major biblical authors (Moses, David, Isaiah, Solomon, Peter, Paul and John of Patmos), they are completely separate sermons with no real connection to one another—neither chronologically or contextually—and no dates are given for their original presentation. This lack of context can make reading a little strange when events are referenced in relative terms (e.g., “A little more than a year ago, three men were orbiting the moon in a space capsule,” [p.8]), some being easier than others to determine the general time of writing. Each sermon is only around six pages long, making them quick and easy reads without too much depth and generally a single overarching point to be made at the end, and the lack of any real connection of one to another easily lends themselves to being chosen and read according to title and/or scripture reference listed in the Contents pages. I imagine some will find this to be very helpful, while others like myself will be left wanting more substance. In my opinion, this could and should have also been released as a series of blog posts free to be read online.

*I received a pre-published, uncorrected proof of this book from Blogging for Books for this review.